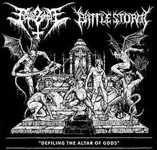 Excellent release coming from this prolific label based in Mexico. This pack comes with two nice, obscured, putrid and extremely holocaustic bands of death metal. It’s strange, because both of them share some similarities, except for the sound of the production and vocal aspects, of course. First attack is from FETID ZOMBIE, a band coming from the mind of the famous artist Mark Riddick who is better known for his awesome cover artworks. These three tracks sounds deadly as a knife inside your guts, you know, the death metal sound in the vein of old bands coming from USA in the 90’s, plus this luciferine touch at the vocal department. These tracks sound somehow a little bit primitive and the darkness at guitar riffs of “Full Moon Necrophilia” is a good example of the aforementioned. Second attack is for BATTLESTORM from Singapore, and this is the violent side of the CD. Three tracks full of aggressiveness, darkness and twisted guitar riffs are enough to show the work of Hades (guitars, vocals) and Iblis his drummer. The sound delivers quite rabid and diabolic stuff, and sometimes is also “primitive” to say something. That’s the aspect to underline and similar to F Z’s creations. Indeed, this guy knows how to insert the hoof in the guitar chords and create excellent aggressions, which is great for me. Both bands are experienced and deserve your attention, so you won’t miss this shit if you are into truly fetid death metal bands nowadays. – Victor Varas