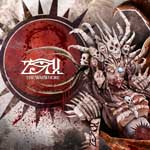 I didn’t know anything about the metal scene in Lebanon before the band contacted me, and honestly I can say that this is a big discovery for me. Also, I can’t remember the last time I listened such a powerful female voice coming from an unsigned heavy metal band, and Maya Khairallah truly holds almost every aspect. She can sing a wide open range of tones without forcing her throat, and also she has this iron spirited touch, like a witch’s spell, and fits perfect to the music. This is pure heavy metal deeply influenced by NWOBHM of the end of 70’s, plus an Epic melody lines. Yes, you will go crazy with tracks like “Night of Evil”, or “Rising” (oh man!! That’s a red fire colored throat) Guitar riffs sounds consistent and solid, and that’s another aspect to underline because this guy Juan Carrizo comes from Argentina, and yeah! It’s a weird combination of nationalities, but it works!! It really works! I can’t say which song is my favorite one since all are excellent, and everyone has an own and mature personality. All in all, this is a very good beginning and worth to get it online. We will be expecting the debut album. – Victor Varas