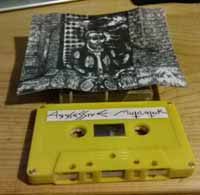 Well, this piece of rancid, primitive and nasty metal impressed me since the first contact. I have to mention that the band sent me a properly promo pack with a tape, and they made clear that they really worship these old traditions in underground metal scene. Think of the most primitive side of old metal music, like Hellhammer, Sarcofago, Mystifier, etc.

Now put a heavy dose of punkish sound in a pure Scandinavian sound and black blood. The result is an interesting hybrid forged in bloody atmospheres, poisonous guitar riffs and rawness. All tracks sound demolisher and with a cold deadly breath crossing the air like a howl. If you ask me, this is the kind of promos that predict great stuff in the future, if the band decides to take the correct road. There are not false melodies, or childish pretentions. This is pure fucking Armageddon based in punk, explosive moments and DIY power. As extra info, this demo includes a very decent cover version of “Massacra“ (original from Hellhammer), and the band has just released a full length album via Ljudkassett. Highly recommended!!– Victor Varas