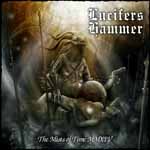 Don’t confuse these motherfuckers with Chilean doom entity also reviewed here. Now we are talking about old metal warriors coming from Michigan. According to Metal Archives, these demons started in mid 80’s, and they really lived the old glories of death/black metal, when both genres lived in an ominous brotherhood.

This is a reissue of the demo “The Mists of Time” from 1997, and also includes a very old demo called “The Burning Church”.  As soon as you listen to first track you will know that they had the old knowledge in those years, and truly have a putrid touch on every guitar riff, with no mercy. All tracks are tied by a consistent dark aura, and music is forged in doomed atmospheres, dense structures and sinister vibes. This album is a great masterpiece of death/black metal crude and direct to the bone, although they included some keyboards elements here and there, and this supposed to give a touch of sophisticated sounds. As aforementioned, the album is crude and forged in rabid lines. The eclectic aspect is undeniable, and no doubt these musicians gave a new perspective of mysticism in metal music. It’s highly recommended. As extra info, this reissue includes as bonus track “Enter the Eternal Fire” (Bathory cover). Victor Varas