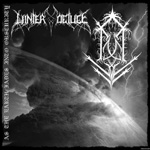 WINTER DELUGE “As the Earth Fades into Obscurity”

My total support goes to Thomas, the owner of FBI Distro who sent me this piece of cadaveric and holocaustic black metal full of rust. He will release this album in vinyl format, though it was self-released a couple of years ago. Last week we reviewed Exordium Mors, and I think once I reviewed speed metallers Razorwyre, but I admit I really don’t know much about the scene in New Zealand.

Winter Deluge is a very powerful black entity with a couple of EPs before they released this full length album in 2012. This is furious black metal forged in the classic side of the genre, if you take a close up you will notice Nordic influences although I rather prefer name them as Greek sounds, as they composed excellent sections in complexity, dark atmospheres and poisonous blood. All tracks deliver hyper violent miasmas of sharp guitar riffs, but I must say that these chaotic elements have good musical arrangements and good taste, if you know what I mean. There are some lines forged in “epic” sounds (just listen to track called “Fall to the Wyrm of Time”) and even they included metallic guitar solos from what seems to be a very talented warrior. In the end, you will find a great album full of ominous lines, chaotic cords and hyper-bestial vocals. It’s a jewel highly recommended if you are into black metal bands coming from real underground scenes from around the globe. – Victor Varas