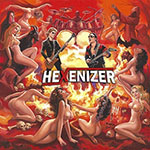 Well, well, this is nothing but a piece of deadly speed metal, proudly forged in the mind of Mexican warrior Andy “Charrocker”, who also was the mastermind of enigmatic project called MAGNIFICAT, some years ago.

Relocated in Germany, this guy decided to create a new band, making homage of what seems to be his own roots musically speaking. It’s a really good mix of speed metal and thrashmetal, with literally tons of guitar arrangements and incisive neoclassical scales everywhere. I really liked this album because contains high octane ideas influenced by early bands in 80’s, and you can hear the true spirit of classic heavy metal, without childish pretentions. Actually, this reminds me a hell a lot the first albums of the band Coroner, because of similarities in vocals and some specific moments here and there. All tracks have good doses of heavy metal spirit as well as dark atmospheres and complexity. It calls my attention the title of almost all songs include the word “witch”, hehe! and I’m sure it’s intentionally. Damn! How has grown this musician!! You will find extremely well done musical arrangements in the entire album, and certainly it shows a lot of work behind rehearsal room. My pleasure to hear again about Andy and his musical career, this album is highly recommended!! – Victor Varas