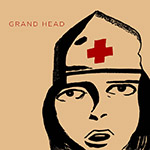 Tim Ward and Barry Brusseau are two brothers with very solid musical skills. And also, both of them know very well about heaviness in music and straight to the face rock n roll, as well as DIY attitude with self-promotion stuff and real underground lifestyle.

Coming from Portland, Oregon, these guys have been playing for a very long time in different bands, and everything here denotes high musical skills with thick roots in punk music, 70’s rock music, and tons of improvisation behind rehearsal room. No bass guitar here, everything is composed via cathartic guitar riffs, and crude drums, so you can imagine this is rock in its purest essence, with strong references to Black Sabbath, The Melvins, even Hellhammer, if you know what I mean. Guitar’s sound is heavy and rude, but Tim knows to workout rock n roll, and all tracks are fueled in distinctive states of mind. My pleasure to know what two brothers with two basic instruments of rock n roll can do. No doubt they have a strong connection after years of playing music, and they transmit good vibes with awesome atmospheres in obscure rock music.

I would call this record as a perfect way to enjoy a Sunday sundown, turn on the turntable, sit in your couch, open a beer and turn off the lights. The immensity of darkness will open your senses to the right dimension, and you will feel what this duo is saying musically speaking. Just open another beer, close your eyes and enjoy the trip. – Victor Varas