Holy shit!! Now we are talking, duuude!! After the debut album in 2013 we didn’t heard anything from this super-band until now. It’s nothing less than absolutely powerful heavy metal with tons and tons of guitar arrangements.

END_OF_DOCUMENT_TOKEN_TO_BE_REPLACED

I don’t know if we can name this band as “superband” but, the music truly made me hard since the first track. Well, you can’t deny they have huge experience in heavy metal business if we see the bands where these guys have been involved, like Manowar, Cage, Ozzy Osbourne, Lizzy Borden, etc. And believe me: behind this incredible cover art, there is an excellent power metal band forged in the true essence of the genre.

END_OF_DOCUMENT_TOKEN_TO_BE_REPLACED 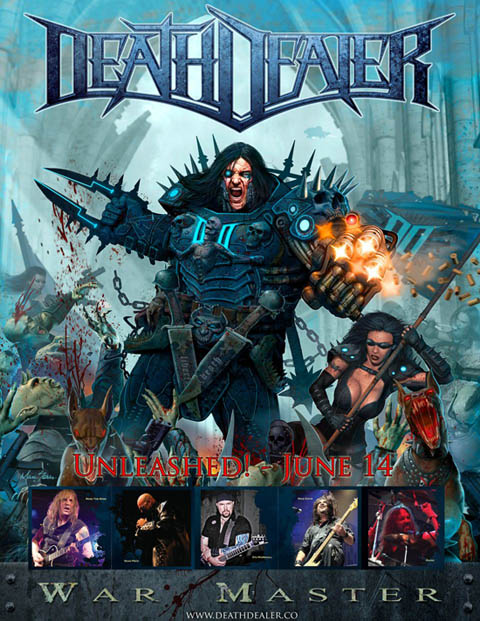 What happens when five metal luminaries spread out throughout the United States and Australia combine their musical pedigrees, musical vision and unquestionable talents via an improbable internet only collaboration?

Into the metal blender throw also the amazing fact that they are former and current members of world acclaimed heavy metal bands such as Manowar, Halford, Lizzy Borden, Dungeon, Empires of Eden and Cage.

With the firepower of a precision musical unit, a laser focused display of prowess and a dozen kick ass songs, the new heavy metal super group DEATH DEALER has been unleashed upon the masses.

Ross The Boss: Does this legend require an introduction? While with Manowar, Ross not only influenced legions of aspiring musicians, but he was also part of their legendary first 6 classic albums that have sold more than four million copies worldwide. In addition to releasing two acclaimed albums with the Ross The Boss band, New Metal Leader and Hailstorm, he recently toured with ex-Dictator bandmates as a member of Manitoba.

Rhino: This one-man wrecking crew built his reputation as the drummer for Manowar, Holy Hell and most recently Angels of Babylon. Rhino is also an acclaimed singer, songwriter, guitarist and producer.

Mike Davis: Making a name for himself as the ‘go to guy’ in his days with Lizzy Borden, when the Metal God himself, Rob Halford, put out a call for bassists, producer Roy Z knew Mike was the perfect fit. Known for both his abilities and killer live stage presence, Mike was also Death Dealer’s first and only choice.

Stu Marshall: The Sydney, Australia guitarist/producer achieved fame as the lead guitarist for Dungeon. He is also the mastermind behind Empires of Eden, which led to his working such metal heroes as Udo, Rob Rock, Mike Dimeo, Steve Grimmett, Zak Stevens and many more.

Sean Peck: One of metal’s most illustrious voices, Peck recently celebrated his band Cage’s 20th anniversary. Referred to as “The man of a thousand voices,” he has been compared to such names as Halford and Dickinson, and this assemblage of talent allows him to show off every part of his God-given instrument.