LEGIONS OF WAR “Honour to the past”

I have different feelings about this CD. On one side, I’d definitely prefer fresh music in a new album, because these guys know very well about their thrash-black metal style, and they have released really good pieces of destruction in the past. In the other hand, this is nothing but high quality homage to the roots of heavy metal with class.

END_OF_DOCUMENT_TOKEN_TO_BE_REPLACED 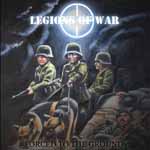 LEGIONS OF WAR “Forced To The Ground”

It’s a pleasure for me review the new material from this band. Again, they released an excellent piece of thrash/black metal and now they truly sound like an infernal metal militia. All tracks have a heavy charge of fast and deadly guitar riffs, ominous vocals and corrosive lines.

END_OF_DOCUMENT_TOKEN_TO_BE_REPLACED 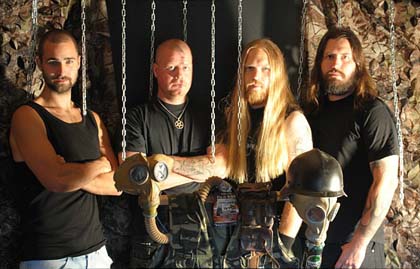 4 years after their tremendous & merciless surprise attack entitled “Towards Death” in 2009 which took no prisoner (and highly acclaimed by underground medias that compared the bands to such monsters as DESTROYER’666 or GOSPEL OF THE HORNS !) – and their self-released thunder assault “Riding With The Blitz” (an EP with two new tracks in 2011) – swedish warmongers LEGIONS OF WAR come out from their long retreat with a new arsenal to take the world by storm ! 9 new missiles made in the strongest steel with an incredibly precise strike force will soon be unleashed on INFERNO Records under the name “Forced To The Ground” !

This new armada shows a more aggressive and still heavier side of LEGIONS OF WAR !

Guitar riffs cut like scalpels, rythmics are like hammers coming down in a relentless manner, vocals are raw & scorched (but still very clear, no growls or grunts… or hysterical screams) and express all the atrocities of war like never before…

The style is basically THRASH with a very personal approach (the whole concept is about WAR, which means the sound is very cold) but has definitely a strong HEAVY-METAL influence… Guitar solos are the undeniable proof as well as some acoustic parts that will make your blood freeze !

This new assault will be effective by the end of the year (release date is set for December 20th, 2013) under the forms of Digipack CD, regular jewel case-CD and cassette – and will for sure please all fans of bands like DESTROYER’666, GOSPEL OF THE HORNS, KREATOR, SODOM.

Two new songs are now available for streaming on SOUNDCLOUND :

– Forced To The Ground (https://soundcloud.com/infernorecords666/legions-of-war-forced-to-the)

A promo-video for “Forced To The Ground” will soon be available for streaming too – stay tuned !

For more information on the band  www.legionsofwar.se

LEGIONS OF WAR “Towards Death”

I remember I wrote a review of the demo from this band, when the Zombie zine was on printed version. They continued with the line of aggressive thrash/ black metal, and clearly developed a style influenced by both genres, but without falling in mistakes. Guitar riffs are the main base of this attack, and they know how to create violence through a crude wall of sound. Everything has a rancid stench, and I consider this mix of thrash metal as a legitimate Scandinavian holocaust, as they transmit dead proclamations and apocalyptic traces. Tracks like the “Reflections from the Past” and its brother “Dead Man Walking” (“A soldier’s Departure Pt. 1 and 2”) delivers melodic guitar riffs, but everything is tied with frozen atmospheres and creates quite interesting sounds of dead and destruction. This is a band looking for an own sound, and is moving the ass to get a good promotion in the underground. It’s highly recommended if you are into blackened metal bands rooted in aggressive thrash metal. – Victor Varas