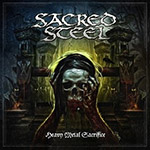 Am I getting old? Or is just that Power metal bands don’t impress me too much, unless they have something really extraordinaire? Anyway, these German veterans released the tenth album of their career, and although I’ve been listening to it all day in the office, this doesn’t make me move my ass off.

END_OF_DOCUMENT_TOKEN_TO_BE_REPLACED

I didn’t know that this German power metal band is still active. The long standing vocalist Gerrit Philipp Mutz (also vocalist in doomers Dawn of Winter), did an excellent job on this new album, and definitely his throat has grown up since the last time I heard him, on “Reborn in Steel” album. Yeah, it sounds extremely powerful and matured, and that’s meaningful because gives personality to the band. The music is quite obscured; actually I like this dark atmosphere on the whole album and its approaches to thrash metal, from time to time. Tracks like “Crypts of the Fallen” is a perfect example of the aforementioned, and also find it interesting because breaks the melody axis on the composition. Creativity, power and experienced guitars, we use three aspects to describe the album. Of course there is some breath to Judas Priest, Painkiller’s Era, the most classic and traditional heavy metal, and also the concept is rooted on horror comics of the 80’s. The CD version comes with three truly powerful bonus tracks, including a cover version of “Dig Up Her Bones”, from Misfits. They came back to show the audiences they are a solid and smashing heavy metal band. And certainly they know how to do the business. – Victor Varas